Interview with Tracey - A British expat living in the Netherlands

Tracey is a British expat living in Breda with her husband, aka Mr Sunshine, and their beloved Tibetan terrier, Alfie. She shares her expat experiences with a touch of humour and offers some great tips for those thinking of relocating to the Netherlands. You can read more about Tracey's expat life in the Netherlands on her blog, Private Letters to my Best Friend. 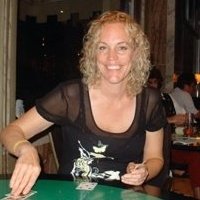 A: Originally from South Yorkshire in the UK, although I lived in Derbyshire for ten years and considered it home.

A:  Breda, pretty much in the city centre. The Netherlands.

Q: How long have you lived in Breda?

Q: Did you move to the Netherlands with a spouse/children?

A:  I do nothing apart from gather guilt and study with the Open University, but my partner is a lecturer in games design at NHTV here in Breda

Q: What do you enjoy most about Breda, how’s the quality of life?

A:  Difficult question, I’d like to say the culture and the wide variety of accessible museums, but really it’s the social life I like best. Sitting in the cobbled Grote Markt on a Friday night, a complimentary blanket tucked round my thighs enjoying a glass of wine and giggling with new friends. Did I write ‘a glass of wine’? I might have meant one or two glasses…hmm.

A:  It goes without saying I miss my family very much, especially my two grown-up sons, I miss being able to jump in the car and visit friends we’ve known and loved for years. There are times I crave hills and rolling countryside (the flatness of Netherlands can be a bit monotonous), British supermarkets and being able to answer when asked for directions anything other than ‘Het spijt me, ik speek Nederlands niet zo goed.’ ('I’m sorry, I don’t speak Dutch well').

A: It feels safe, and I’ve not experienced any problems, not even when walking our diarrhoea prone dog, Alfie, at 3am in the centre of Breda wearing only my nighty and Mr Sunshine’s waterproof coat.

A: Well, we own a car, but to be honest I don’t think we need one. In a normal week I doubt the car travels more than 5 miles.  Living in a city centre means everything is either walking or cycling distance. Now, a bicycle that is something you do need if you want to live in the Netherlands, and don’t bother buying one before you arrive in the Netherlands. The Dutch have everything bicycle-oriented wrapped up, your cheap British bike will end up wrecked and gathering dust in the back of the shed or drowning at the bottom of a canal after its third puncture of the week.

About living in the Netherlands

Q: Which are the best places/suburbs to live in Breda as an expat?

A:  I am prejudiced towards living in the centre of Breda, the shops, cafes and restaurants can all be reached in minutes, as can the gastronomic delight of the twice-weekly food market. Generally the other expats tend to live either in or near the city centre too, so it’s easy to meet up for a coffee or wine. There is another area 2 miles outside the centre, Ginneken, which has all the benefits of a mini city centre, plus is walking distance from Mastbos, the local forest and meeting place for dog walkers. However, Ginneken’s prices reflect perfectness of its location and so it’s not for the likes of me.

A:  It feels expensive. Food shopping and eating out seem particularly pricey. Car insurance and the road tax are more than double what we’d pay in the UK and so are TV/phone/broadband packages, although to be fair I think we picked a bad deal. However, some of the costs are a nice surprise, such as the Dutch equivalent of council tax – which is about half the price of the UK. And toilet paper, you can buy a surprisingly large quantity for a couple euros here.

A:  The locals I’ve met are extremely friendly and helpful, although after almost a year here I sense they expect my Dutch to have progressed further than my ability to apologise. I found if you exaggerate British politeness and say please and thank you a lot the Dutch find it quaint and bend over backwards to help. It doesn’t hurt to compliment them on their excellent English either if you need help with a particularly tricky problem. Socially, apart from one very good Dutch friend, most of the people we mix with tend to be other expats met through Mr Sunshine’s job. Although that said I am at the waving stage of a friendship with many of the locals, and who knows, by this time next year might have progressed to discussing the weather.

Q: Was it easy meeting people and making friends in Breda?

A:  It was almost too easy making friends with the expat community here in Breda, the friends we made went out of their way to make us feel welcome and included when we first arrived. On the downside I guess it made us lazy, we didn’t need to try so hard to integrate as we already had a perfect readymade community that we could just slip into.

About working in Breda

Q: Did you have a problem getting a work visa/permit for the Netherlands?

Q: What’s the economic climate like in Breda, is there plenty of work?

A: I’m ashamed to say I don’t know about the general work climate in the city, but in our small community there is a sense of uncertainty, the government is making many changes, and for now our future seems rather vague and hazy.

Q: How does the work culture in the Netherlands differ from home?

A:  It appears as if the Dutch have a sensible work/life balance. Unfortunately that doesn’t extend to the expats that I know. Mr Sunshine regularly works seven days a week and well into the night.

A:  Yes, we had a relocation company help with the basics when we arrived as part of the relocation package. Personally, I would have preferred to source my own relocation company as the one we were allocated was not particularly helpful or able/willing to give good advice.

A:  I’ll ask him to fill this bit in himself. No. Okay so that wasn’t helpful. Mr Sunshine says he didn’t have any problems adjusting to our new home, but that’s not strictly true. The Dutch custom of dressing up at every opportunity definitely unsettles him as do the small Dutch beer glasses.

Q: How would you rate the healthcare in the Netherlands?

A:  Originally I thought the healthcare here was great, I was very excited by the efficiency of the local doctors and dentist surgeries, the speed with which we were seen and the ease of ordering prescriptions. A year later I’m disappointed by what was not covered by the expensive health insurance (check your policy carefully), the reluctance of dentists to use anaesthesia (it is not covered by your health insurance and when you’re having nine fillings I guarantee you’ll need it) and the difficulty in working their automated phone system – pressing "1" appears to always connect you to the emergency doctor, who although friendly, is getting somewhat tired of listening to my apologies.

A:  Avoid automated phone systems and whenever possible speak to people in person. DO NOT import your British car to the Netherlands. Not only does importing your car involve many uncomfortable trips to the RDW to register and inspect your vehicle, it will involve paying a relocation agency to help with the paperwork. That same relocation agency will not advise you that road tax here is weight dependant – not good for a Land Rover, even a small one – they will not advise you that the angle of the lights on a British car will need to be changed at considerable cost and that once those changes have been made you will never be able to sell your middle-aged imported Land Rover with the steering wheel on the wrong side. So, sell your car before you relocate here, use the money to buy a small lightweight run-around that you’ll hardly ever need, and use the rest of the money to treat yourself whenever a wave of homesickness raises its pale little head and you considered giving in and running back to the familiar, but colourless life of a non-expat.