Interview with Paul - A British expat living in China

Paul is a British expat living in China. He moved to Jinan, the capital of China’s eastern Shandong province, to immerse himself in a different culture and learn a new language. He supports his adventures in China by teaching English. 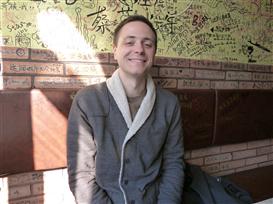 A: I’m originally from northern England. I grew up in Manchester and lived in Leeds for eight years. I feel it’s my duty to let everyone know there is more to England than just London!

A:  I’m living in Jinan, Shandong. You might not have heard of Jinan, I like to think of it as ‘real China’.

Q: When did you move to China?

A:  Thankfully, I was only responsible for relocating myself.

A:  I moved to China to immerse myself in a different culture and learn a new language. I support my adventures by teaching English.

Q: What do you enjoy most about Jinan, how’s the quality of life?

A:  The people in Jinan are incredibly friendly. I can guarantee you’ll have lots of opportunities to practise your Chinese in Jinan; the locals love to talk. Jinan is also located in the historical heart of China and is well connected by the high-speed rail line. It is a great place to base yourself and explore China.

A:  Jinan suffers from chronic air pollution. This isn’t a secret and it also affects many Chinese cities but it can be demoralising. I miss big blue skies. I even miss the rainclouds of Manchester!

Q: Is Jinan safe? Are there any areas expats should avoid?

A: Jinan is incredibly safe. I have never felt threatened in Jinan. The main dangers come from the roads. It seems to pass a driving test in China, all you need to do is demonstrate the enthusiastic use of the accelerator and the horn. There is also bicycles nipping about everywhere, in every direction.

Q: How would you rate the public transport in Jinan? What are the different options? Do you need to own a car?

A: There is a cheap and extensive bus network in Jinan. The buses are old, dirty and crowded but they get you where you need to be. I wouldn’t recommend owning a car unless you like collecting scratches and dents in your bodywork.

Q: How would you rate the healthcare in Jinan?

A: I have no personal experience of the healthcare in Jinan but my friends have had few complaints.

About living in Jinan

Q: Which are the best places/suburbs to live in Jinan as an expat?

A:  Most expatriates in Jinan are students and English teachers. The University areas have lots of restaurants, cafes and clothes stores. Most shopping and tourist sites are located around Spring Square and the surrounding blocks.

Q: How do you rate the standard of housing in Jinan?

A:  For my own experiences, it’s a bit of a mixed bag.

A:  The standard of living in Jinan can be incredibly cheap if you are prepared to adapt. Local food and travel are extremely cheap. However, if you can’t live without your coffee and cheeses, you’ll have to be prepared to pay for it.

A:  The local residents are extremely friendly. I will be approached most days by curious people wanting to know what I’m doing in Jinan. People will quite innocently ask for your phone number after speaking to you for 15 seconds. The expatriate community is extremely small and well connected. You’ll hear about any new job openings straight away, although the gossip travels just as fast too.

A:  Personally, I would not say it was the easiest. When I arrived I couldn’t speak Chinese and I struggled. Even now that I’m learning Mandarin, I’m discovering that Chinese people still have many barriers. The expatriate community is very sociable, though quite cliquey.

About working in Jinan

Q: Did you have a problem getting a work visa/permit for China?

A:  There were no problems getting a working visa because my employers sorted it all out.

Q: What’s the economic climate like in Jinan, is there plenty of work?

A: There are lots of teaching jobs in Jinan. It would not be a problem to find a job.

A:  It differs drastically. Be prepared for the unexpected.

A:  No, I travelled here with just a backpack and suitcase.

A:  Jinan is not a beautiful city and it can be a challenge. My first impressions of Jinan were terrible but I really enjoy living here. I could have moved to Beijing or Shanghai but I wouldn’t have been motivated to learn Chinese or experience new ways of living. There are great places in and around the city, you just have to get out there and find them. Arrive with bucket loads of patience, tolerance and good humour and you’ll be fine. And don’t leave the house without a packet of paper tissues!