Interview with Meghan - An American expat living in Britain

Meghan is an American expat who has been living in the UK for the past eleven years. She is married to a British man and they live in Worthing with their three children. Meghan is the author of a book about raising kids abroad, Bringing Up Brits: Expat Parents Raising Cross-Cultural Kids in Britain.

Read more about living in the United Kingdom in our UK guide or read more expat experiences in the UK. 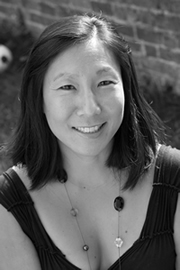 A: Knoxville, TN, but I was born in Korea (I was adopted at age eight months and grew up in the USA)

Q: How long have you lived here?

A: I moved with my British spouse (but he was not my spouse at the time I moved, we got married a year after I moved to Britain.)

A: I moved because my British boyfriend (now my husband) is from England and he wanted to move back. At the time we were both living and working in Tokyo.

I am a designer and I run my own design company. I am also the author of a book called Bringing Up Brits: Expat Parents Raising Cross-Cultural Kids in Britain.

About living in the United Kingdom

Q: What do you enjoy most about Worthing, how’s the quality of life?

A: I love the seaside feel to it. Even in the winter it is nice to walk along the beach for some fresh air and sea breeze. Quality of life is good, but things are pretty expensive (in Britain in general).

A: I miss the food, the grocery stores, the friendliness and openness of the people and the sense of community.

Q: Which are the best places/suburbs to live in Worthing as an expat?

A: I wouldn’t say Worthing is a great place at all to live as an expat. It’s not very multicultural compared to larger places and the people are very ‘homey’. Most people have lived here all their lives and have all their family and friends around them. So it’s hard to make friends as an expat.

Q: How do you rate the standard of accommodation in the UK?

A: Okay. The houses are much smaller compared to American houses and far more expensive. You don’t have things like closets, laundry rooms/areas or front yards like you do in America. Only one bathroom is standard in a three-bedroom house. In America you’d have at least ½ bath in a three-bed house. Of course if your budget is higher than £300,000 then you could have a bigger house or, if you lived further north of London, then you get more house for your money. We live in a three-bedroom Victorian terrace and it is small with a tiny backyard, no parking, no garage but it is very expensive.

A: I only know one other expat who lives in Worthing and she is Canadian. There are not many expats living in Worthing at all. The locals are nice, but it’s hard to meet people and to get to know people. Neighbours mainly keep themselves to themselves.

Q: Was it easy meeting people and making friends in the UK?

A:  No, not at all. Over the years I have made friends but I still find it hard to get past that initial stage. People already have their own set of friends and they have their families here so they are not as open to meeting people. Especially when you are older and have kids so you don’t go out a lot in the evenings. I meet a lot of people and I see a lot of people at the school gates and through my business, but actually making friends is really hard.

About working in the UK

A:  No because I was married to a British national.

Q: What’s the economic climate like in the UK, is there plenty of work?

A: Yes, but I’m not sure about work for younger people or graduates.

A:  Americans probably have a stronger work ethic overall and I think have fewer national days off. People are less willing to pitch in for ‘the good of the company’ and tend to view weekends as strictly non-working days. So it is different. The terminology is also different and takes some getting used to.

Family and children in the UK

A:  The schools are generally very good. I have been really pleased with all the schools my children have gone to and are currently attending. I would recommend looking at all the options carefully, visiting the schools and meeting the head teacher. Ask questions and be assertive with the teachers.

Q: How would you rate the healthcare?

A:  Very good. Although the British NHS gets a lot of negative press, it’s actually very good for families and children. The system is completely different to the States though so it takes some getting used to. I have never had a problem with any aspect of it.

A: Join some type of group, whether it be a networking group, community group, baby and toddler group or church group or something else. Even if your first attempt is not successful, keep at it and stay positive, you will eventually meet some nice people and start to make friends. It took me four years to make friends and feel a part of something. I really put myself out there and got knocked back many times. I didn’t have any support from friends or family (my husband was too busy with work and he had his own friends) and found it very difficult to fit in and make friends. It takes time to learn the social etiquette and terminology as well.

►Learn more about moving to the UK