Interview with Kaitlin – an American living in Austria 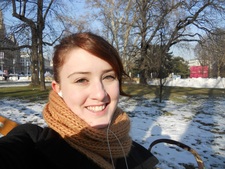 Kaitlin, aka American Schnitzel, leaves us some breadcrumbs about life in Austria. She left the sunny shores of Florida to fulfil her dream of living and studying somewhere, anywhere in Europe; and now, fantasy has become reality and she shares the experience with Expat Arrivals.

A:  I am from Hollywood, Florida about 30 minutes away from Miami.

A:  As of now, I live in Vienna, Austria close to the Inner City.

A:  I have been living in Vienna for about nine months now.

A:  Hmmm...That is a good question. Since I was about five years old, I have always dreamed of moving to Europe and studying. I was pretty determined that was where I would go after my high school career. About three years ago I met my boyfriend over Flickr, a photo sharing network; he had contacted me while he was in basic army training and we just started talking.  We then started a long distance relationship and two years later I decided that Vienna was going to be my new home. I am a college student, but before I can start my studies I must be able to speak German fluently and I must finish a few other courses. So at the moment I just study German.

Q: What do you enjoy most about Vienna, how’s the quality of life in Austria?

A:  I enjoy Vienna very much, it has a special charm that no city back in the States has. The quality of life is great here, back in South Florida you feel a rushed atmosphere no matter where you go. Here, it is a big city but I think the feeling of being rushed, is not so big. There are a lot of parks everywhere and you can just go and walk around the city and you feel safe. There are areas you want to avoid at night, but during the day it is safe pretty much everywhere.

A:  As an American I like my personal space, and in Vienna and most big cities people don’t respect the bubble as much; in the metros people don’t mind rubbing up against you, and in the grocery stores if you leave even a small space someone will cut you in line or push a basket against your back. What do I miss about home, I miss my family very much, and during the summer I missed air conditioning.

Q: Is the city safe?

A:  YES! The city is safer than a lot of areas I lived around in the States. Where I came from there was a lot of fighting and random killing, here I haven’t heard about that as much as I did back home. Like everywhere, you have your bad areas that you wouldn’t want to walk in alone at night, but in general it is a very safe city.

About living in Vienna

Q: Which are the best places/suburbs to live in Vienna as an expat?

A:  That is a good question, I live in the second district and it is known to have a lot of students and immigrants. I don’t know a place to live that is better for an expat, but I would say that accommodation in the Inner City can get really expensive. The second and third districts are a convenient distance from the city centre, but they are not in the very heart of things. That said, with public transport anywhere is easily accessible within a few minutes.

A:  The locals can be a mixture of characters, some are very friendly and very helpful, whereas on the other hand, there are very rude people as well. I mix with everyone, I try to keep to the locals and other immigrant students, I have no American contacts or friends here.

A:  For me no, it was difficult when I didn’t go to school, and I don’t work so it was hard to put myself out there to meet other people randomly. I would suggest anybody looking to make friends either join a night course learning German or find a hobby.

Q: What are the schools in Vienna like, any particular suggestions?

A:  I am attending the University of Vienna, I would suggest this school first if you are in college or going to start college. It is public, and the private colleges here are more expensive unless you are interested in another field that the University doesn’t have classes for. It is a good starter for any student who wishes to study in Vienna.

Q: How would you rate the healthcare in Austria?

A:  I would rate the healthcare system here on a scale 1 through 10 a 12. Back in the States we don’t have socialised medicine, and it truly has been wonderful to take advantage of this system in Austria. I became ill once with a bad virus, and walked into an ER and was taken in, given tests, examined and I walked out not paying a dime. It was really great care and now if anything is not right I am not afraid of going to a hospital and having them check what is wrong.

A:  My advice would be to make sure you and your family really want this. It will certainly not be easy in the beginning and relocation can cause a lot of stress and frustration, but it will be so rewarding. I would also tell somebody to not worry if it’s not going the way you wanted, give yourself time to settle in. You won’t ever regret it.