Interview with Eva - an Indonesian expat living in Moscow

Eva is an expat originally from Indonesia. She has been living in Moscow for a few years after having previously lived as an expat in Spain. She has adapted to Russian life and culture and loves how she feels safe walking around the city. Eva encourages expats to get out and explore Russia, both big and small cities. She shares her stories in her blog, Sightseer's Diary. 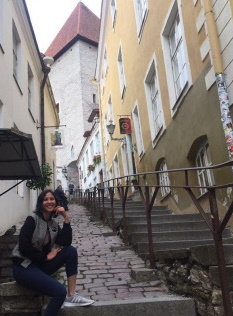 Q: When did you move here?
A: I moved here five years ago.

Q: Is this your first expat experience?
A: No, I lived in Spain for a short time 10 years ago.

Q: Why did you move; what do you do?
A: I moved because my husband is Russian, and I also moved for educational reasons.

Q: What do you enjoy most about Moscow? How would you rate the quality of life compared to Indonesia?
A: What I like the most about Moscow is the city itself. It is always clean, vibrant, and full of entertainment and friendly pedestrians. It means that you can walk as far as you want to and feel safe about doing so. That’s totally different from my home country. In Indonesia, it’s hard to walk anywhere without being concerned about your safety as the people drive like crazy. The transport in most of the cities is well developed, fast and clean. Museums are everywhere and sometimes they have a free-entrance season where you can visit without paying. This is normally around the summer or on the anniversary of the museum's opening.

Q: Any negative experiences? What do you miss most about home?
A: Some negative experiences I’ve had have usually involve customer service in Moscow. That's another thing I miss about home. While in Indonesia customer service is everything, in Russia it means nothing. I have even been pushed by a hotel’s driver solely because I got into the car on the wrong side of the road, even though it was because of the way he had mistakenly parked his car. In Indonesia, when such things happen, you can easily report it to the hotel management, and they will take some action to ensure their employee won’t behave rudely to the guests again.

Q: What are the biggest adjustments you had to make when settling into expat life in Moscow? Did you experience any particular elements of culture shock?
A: The biggest adjustment I had to make when settling into expat life here is related to culture and language. What’s different from Indonesia is that people in Russia seldom smile. After living in a country full of smiles there have been many times that I felt like a clown in Russia because I smiled at the wrong moment. People will ignore you if you don’t speak any Russian. If you ask the wrong person a question (for example, for directions), they will rarely give you the right answer and they might even lead you astray.

Q: What’s the cost of living compared to home? Is there anything particularly expensive or particularly cheap in Russia?
A: Meat, poultry and milk products are considerably cheaper compared to Indonesia. But fish and tropical fruits are as expensive as gold.

Q: How would you rate the public transport in Moscow? What is your most memorable experience of using Moscow’s transport system?
A: Transport is moderately safe, clean and fast. It always arrives on time without any delays, even on a snowy winter day. I had a funny experience once when I boarded the commuter line from my small town to another town (same size as my town, outside of Moscow) to visit my husband’s grandmother. My husband and I promised to meet on the train on carriage number five. I counted the carriages and sat down there for a long time, telling my husband by phone that I was in the right place but I didn’t see him. We argued for some time assuming that I had boarded the wrong train while he kept looking for me moving from one carriage to the other. In the end, we met, and it turned out that the train had three number five carriages!

Q: How would you rate the healthcare in Moscow? Have you had any particularly good/bad experiences with regards to doctors and hospitals? Are there any hospitals you would recommend?
A: As my city is located outside of Moscow, it is quite small compared to the capital. It only has a few hospitals. Some are free if you have OMS, the main insurance in Russia if you are a temporary or permanent resident or a citizen. Some you must pay for. I prefer to go to the paid one as I’ve heard lots of bad feedback about the free ones. But, the free hospital is in my city.

In Russia however, you can’t generalise about your experience with hospitals. Some free hospitals offer good service, good facilities and professional doctors. So, it often depends on your luck. My experience with paid hospitals is good, so far. The doctors are professional, the hospitals are equipped with state-of-the-art facilities, the examinations are thorough and the price doesn’t bleed me dry. Frankly speaking, it is much better compared to Indonesia.

Q: What are the biggest safety issues facing expats living in Moscow or Russia? Are there any areas expats should avoid?
A: In Moscow, there isn’t any particular area one should avoid, although in small cities there might be. Russia doesn’t have big safety issues, I think.

Q: How do you rate the standard of housing in Moscow? What different options are available for expats?
A: Apartments in Moscow itself are really expensive, especially if they're close to the subway or in the city centre. The general rule is that the closer and the more comfortable the journey is to the centre, then the higher the price. But, living in suburban areas or small cities isn’t always a good choice. Although it takes less time to reach the centre of them, there will be fewer facilities for you to enjoy.

Another rule that expats need to know is that if you are not a resident nor citizen, the only property you can buy is a normal apartment (not a kvartira with subsidiary from the government).

Q: Any areas or suburbs you’d recommend for expats to live in?
A: Living closer to the centre is merrier for expats, especially if you work in the capital.

Q: How tolerant are the locals of foreigners? Is there obvious discrimination against any particular groups? Have you ever experienced discrimination in Moscow?
A: Russians are always interested in foreigners. If they think that you look different they will stare at you as long as they want. Until you catch their gaze, then they may pretend not to see you, although some of them will keep watching you. But I have been living here for five years, and I have never experienced any discrimination in my host city.

Q: Was meeting people and making friends easy? How did you go about meeting new people?
A: Making friends in Russia is harder than in Indonesia. Here, you can’t easily make friends at university or in the workplace like in most other countries. Russians somehow seem quite closed. Not all of them of course. Some are friendly enough to start a conversation and invite you to walk around the city and that’s how friendship is made in Russia. They need time to get to know who you are before considering you as a friend.

Q: Have you made friends with locals or do you mix mainly with other expats? What advice would you give to new expats looking to make friends with the locals?
A: I have some local friends. One I met in university and one is an online student of mine. We meet when we have time and keep in touch by sending messages to each other. My advice if you want to have Russian friends: don’t forget to learn Russian, it will simplify your life and it also shows respect to your host country’s culture. Don’t feel hesitant if your Russian acquaintances invite you to stroll around their city or have some coffee. Russians are very bold, if they invite you for something, they mean it. And be yourself!

Q: Was getting a work permit or visa a relatively easy process? Did you tackle the visa process yourself, or did you enlist the services of an immigration consultant?
A: Getting a work permit in Russia is not an easy process. There’s a long wait time, and you need a bunch of documents and patience. But if you are invited to Russia by your company and they are ready to support you, I don’t think it will be a problem. Most people prefer to use the services of an immigration consultant, which they can hire by themselves or the company will do it all for them. So, it depends on where you work and for who you work.

Q: Is there any advice you would like to offer new expat arrivals to Moscow or Russia?
A: First, don’t be mad if you don’t get a smile as often as you do in your home country. Russians hardly ever smile – they will only do so if they really know you.

Second, don’t forget to learn Russian. I think that learning Russian is the most essential thing to make your life more comfortable during your stay in Russia. Not only will it help you when you buy something at the store, but it will also help you immerse yourself in Russia's culture, make new friends and explore new places.

Third, try to explore as much as possible. The more you know about Russia, the bigger the love you'll feel for the country and the more comfortable your stay will be. Don’t only focus your time on your city or only in big cities. Small cities are also great. I think those three things are essential for me, and for any new expat who will be staying in Russia.