Getting Around in Frankfurt

One of the advantages of living in Frankfurt is its inexpensive public transport system. For those who live and work in the city, a car may not be necessary. With a good city map or Google Maps, expats will find that getting around Frankfurt is quite easy.

For those who enjoy a good walk, it is possible to walk around the city centre. The public transport system in Frankfurt is of a very efficient and reliable.

There are a variety of different ticketing options, depending on how often a person uses public transportation in Frankfurt.

The Rhein-Main Transport Association (RMV) operates the S-Bahn lines, while the Verkehrsgesellschaft Frankfurt (VGF) operates the U-Bahn lines, trams and buses in Frankfurt. Given the city’s bustling nightlife, especially on the weekends, there are night buses which run till the early hours, allowing Frankfurt residents to save on taxi fares and to get home safely late at night.

Frankfurt’s Central Station is possibly the most important transport hub in Germany. More than 1,000 trains connect Frankfurt with other cities in Germany, as well as with international destinations. All the S-Bahn services stop at the Central Station. Trains are usually very punctual and there is a timetable of all the trains that stop at each station.

The S-Bahn connects Frankfurt with the densely populated Rhein-Main region. When the S-Bahn leaves the city, it travels above ground, covering the main areas in Frankfurt (such as Konstablerwache, Hauptwache and Frankfurt Central Station), and also provides access to the trade fairs and airport. The S-Bahn trains also travel to nearby cities, including Wiesbaden, Bad Homburg, Mainz, Darmstadt, Kronberg, Friedburg. The U-Bahn serves Frankfurt and the larger suburbs of Bad Homburg and Oberursel in the north.

Frankfurt has a very efficient tram service. The trams travel over ground and usually run on tracks which go down the middle of roads. Trams serve more stops than the trains do in Frankfurt.

It might be a shock for some people as passengers might have to walk onto the road to get on or off a tram at times. While it is perfectly safe to do so, be very careful to check that cars have stopped before crossing. It is mandatory for drivers to stop behind the line and give priority to tram passengers. However, there may still be reckless drivers on the road who don't always obey this law.

Trams stop at every designated stop so passengers do not need to press the bell to request a stop.

A number of buses serve Frankfurt. Each stop has a name which will be announced and displayed onscreen prior to the stop. Buses in Frankfurt cover a greater area and serve more distant suburbs which are not covered comprehensively by Frankfurt's train network.

All night bus services start and end at Konstablerwache.

Taxis are readily available in Frankfurt. If a passenger knows the street name and postal code of their destination, the driver should not have any problem finding a place.

Just like any other city, taxis can be expensive depending on how far one wants to travel. Taxis are a viable option when travelling short distances within the city centre. Travelling by taxi also becomes cost-effective when a number of people are travelling together to the same destination.

Frankfurt is a pretty safe city for those who wish to cycle. There are bicycle lanes in most parts of Frankfurt.

Although it is not compulsory to wear a helmet while cycling in Frankfurt, expats are advised to do so at all times.

While most people living in Frankfurt opt to use public transport to commute in and out of the city each day, driving does have its own benefits – such as increased independence and ease of access, which cannot be replicated by other modes of transport. Having a personal vehicle is especially useful for expats with children as well as those who wish to explore the outskirts of Frankfurt more freely in their spare time.

The standard of road infrastructure and signage in Frankfurt is excellent so expats will find that driving in Frankfurt is a pleasant experience. Furthermore, local motorists are generally patient and courteous.

The major downside to driving in Frankfurt is the lack of parking in the city, which is not only hard to find but expensive. Rush hour traffic can also be a problem for commuters.

►Read Accommodation in Frankfurt to get an idea of the property market in the city.

Are you an expat living in Frankfurt?

Expat Arrivals is looking for locals to contribute to this guide, and answer forum questions from others planning their move to Frankfurt. Please contact us if you'd like to contribute. 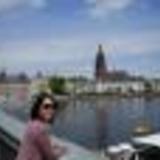 Yolande moved to Frankfurt with her husband in May 2012 for his new job. She enjoys cooking, photography and travelling and would like to use her time in Germany to explore the country and learn the language. Read about her experience on her blog, Chronicles of Yoyo.