Weather in the United Kingdom

As an island on the edge of continental Europe, the United Kingdom is positioned at the convergence between the moist maritime and dry continental air currents, which results in atmospheric instability and extremely unpredictable weather. Many types of weather can be experienced in one day and rain is possible at any time of year.

Generally speaking, southern regions are more temperate and mild than northern regions. England enjoys the warmest temperatures on average and is generally more sunny and less rainy than the rest of the UK. Scotland has the coldest weather and is also the wettest country for most parts of the year.

Winters, between December and February, are cold and wet with occasional snow, especially in Scotland and the high-lying areas of England, Wales and Northern Ireland. Summers, between June and August, are warm and balmy, and although there are frequent showers expats are surprised to discover that the summer season is generally very pleasant and the days can be very long.

When the grim, grey weather of winter does lift the country comes alive and residents take advantage of the beautiful countryside and the large number of urban parks and gardens. 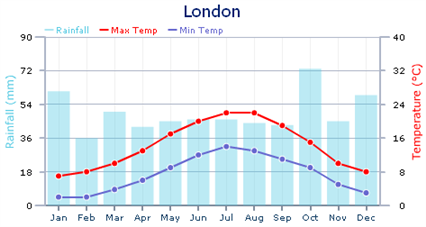 Are you an expat living in The United Kingdom?

Expat Arrivals is looking for locals to contribute to this guide, and answer forum questions from others planning their move to The United Kingdom. Please contact us if you'd like to contribute.