Interview with Carey, an American in France

Originally from the US, Carey moved to Toulouse to pursue his Master's degree in Musicology. In his interview with Expat Arrivals, he talks about his experience as a student living in France. To learn more about Carey, follow him on Twitter @That_Musician. 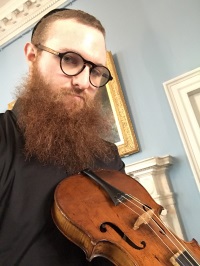 A: Born in Denver, Colorado... Grew up in Cleveland suburbs, Ohio.

Q: Did you move here alone or with a spouse/family?

A:  TAPIF (Teaching Assistant Program In France) brought me here, after my BA in French from the University of Mount Union... Then I moved to Toulouse for my Masters at the Université de Toulouse to study Musicology.

Q: What do you enjoy most about Toulouse? How would you rate the quality of life compared to the US?

A: I enjoy most the collection of buildings that fit my childhood dreams, the various unique details are like a constant dream while you’re awake. It’s about the same quality of life here as it is in the US for a student living in a student-friendly area.

A: Negatives of it are, I suppose, more universal than an expat problem. Graduate studies are a mixed bag, I have a very high-stress degree; I hope I can finish and it worries me all the time. I miss having Mexican food on-hand. I miss seeing my family a bit more, and my dog!

Q: What are the biggest adjustments you had to make when settling into expat life here? Did you experience any particular elements of culture shock?

A: Given I think more like a European than an American, I don’t get shocked. Irritated more than anything with constant (not really) strikes about stupid things. Biggest adjustment thing: I have to function entirely in French since most businesses don’t speak adequate English outside of Paris.

Q: What’s the cost of living in Toulouse compared to the US? What is cheap or expensive in particular?

A: Cost of living seems about the same, considering my student studio is around 528 EUR (around 590 USD), I don’t think it’s too bad. My student insurance is very reasonable for a mutual insurance, that costs probably 10% of what I would pay in the US. Good wine is so much cheaper (2-3 EUR) and you have a pretty fantastic wine. In the US you have to be used to paying around 10-15 USD a bottle. Fruits and veg are cheap, particularly berries and the like. We don’t have a lot of winter in southern France, and are close to Spain, so we have fairly good deals on food.

Expensive? That’s subjective, depends what you want. Marmite from the UK is 8 EUR here, but when in the UK it’s less than 1 GBP. Phones and computers look to be more expensive here when converted into USD. Before I entirely forget, education is most certainly cheaper. At a Université Féderale I pay 476 EUR a year which translates into 532 USD. This includes lots of fees and a social security contribution.

Q: How would you rate the public transport in Toulouse? What are the different options? Do you need to own a car?

A: I would say it’s poor here, especially since I rely on it. It’s always having bus delays, or my quarter not having nearly enough bus services despite impending growth. To get to my university, I have to take a bus, to take the metro, to change to another metro, to get off basically on the same side. A car would cut that down from 40-50 minutes to 10 minutes. The metro is too small for what it is, and the expansion project isn’t working well in Line A. Line B (the only other line) is in the same situation. Both are frequently in “daily dépanne” as I say, since I'm used to it. If you want other options, take a cab or Uber... So basically throw tons of money if you care about being on time, when frequently people are late.

Paris was a much better city in that sense, because there are adequate metro lines and buses, so I wouldn’t have to worry about that as much.

Q: How would you rate the healthcare in Toulouse? Have you had any particularly good/bad experiences with regards to doctors and hospitals? Are there any hospitals you would recommend?

A: Healthcare is great. As an American the ability to not worry about high medical bills is great. I have had one experience with asthma medicine... Where for an eight-month period I was prescribed bad, ineffective treatment and then it went away when I got the right one. Bad experiences are for anxiety/depression-related things... You can’t find any adequate treatment for that... But they do try in France, which is something. Centre Hospitalier Universitaire (CHU) is great and the student health union (basically the mental health and extension of the hospital Gérard Marchant) is pretty great. Insurance is very good here too for students who want good coverage.

Q: What are the biggest safety issues facing expats living in France? Are there any areas expats should avoid?

A: I would say being pickpocketed is the biggest issue. I won’t say how many times I’ve been robbed, but the worst is someone reaching into my pocket to steal my iPhone 6 in Paris in front of cameras, asking me for a petition… Basically, avoid the city outskirts after 10pm, avoid certain minority districts, and especially avoid bars and clubs where this could be a problem.

Q: How do you rate the standard of housing in Toulouse? What different options are available for expats?

A: I actually legally live in the actual city limits. I would say I have a fantastic flat, I adore the quality of space and the layout is pretty nice. However in southern France/Europe there is always bad summer heat and this 2009 building complex was not fit out with AC so it gets hot and miserable quite quick. For students I can say there are student service type companies like mine which provide furnished and non-furnished options. There are also options from like Habitat Toulouse, and the student housing option from the government from CROUS…. I can’t say more than looking at good options to rent or if your company provides housing. I’m always happy to make time to help people about this.

A: Any place close to the metro is great, Carmes near the Quartier des Antiquaires is a great place, Colommiers is usually where the English expats end up, Airbus type employees, further away from the city. I live in Montaudran, it’s quite nice, near the centre is always nice without saying anything.

Q: How tolerant are the locals of foreigners? Is there any obvious discrimination against particular religions or women etc.?

A: As a rule of thumb, if you’re not living in a capital city you might want to actually try to be proficient in the language. I have certain friends who do not speak English at all. There is more women’s liberation here to my knowledge and what I see. As a more and more observant Jew going into Chasidism, I would say we are not the lucky group because we get asked to remove our yarmulkes and people frequently are suspicious in general these days all over. I have a super large beard, part hipster I guess... But more Jewish... I’m sure it doesn’t help. I suppose it could be worse.

A: Well, I can’t say it’s easy when you’re a foreigner. Being musical helps a bit, from my two orchestras... My Master’s degree drags me to campus so I have the chance to socialise a bit. Jewish-related things provide a tighter knit community for those who practise the religion. I also leave the city frequently for research... Been to Versailles/Paris, Köln, London, Berlin, Helsinki, Tampere, Barcelona... I find it easier where there are more people, and where I have friends who help assimilate me more into social groups. Travel is big here.

Q: Have you made friends with locals or do you mix mainly with other expats? What advice would you give to new expats looking to make friends? Any social/expat groups you can recommend?

A: I usually don’t have many expats I keep up with. I have my adoptive family in my synagogue, and the other Jewish-American expats, but really I keep in with locals more and stuff like that. I know for us Jews, there is Chabad on Campus for students which is useful, and a synagogue will always be helpful for finding friends and good support, assuming you’re Jewish. I don’t know many expat groups but I can say just wandering the streets and listening to good conversations you might be able to find some good friends.

About working in France

Q: Did you have a problem getting a visa or work permit? Did you tackle the visa process yourself or did you enlist the services of an immigration consultant?

A: I did it myself, with my family. I never had a problem as my first visa was a temporary short-term (I think) work visa, and then I went back to the US for a hot minute to get my student visa, which I prolonged. I’m happy to help anyone with student visa related stuff.

Q: What’s the economic climate like in Toulouse? Do you have any tips for expats looking to find a job there? Which resources did you find most useful?

A: Considering I am a graduate research student, I can’t say I am much use here. I did a TA job before and then this year I applied for vacant English Assistant TA positions, and that was useful. Always last-minute jobs with the Académie of your region.

Q: How does the work culture differ from home? Do you have any tips for expats doing business in France?

A: I know people don’t usually take work home with them on teaching professions. I know we have lots of holidays and various etiquette, like les bises, and looking people in the eyes when you say cheers and clink your libation. Make sure you know lunch breaks are longer, and sometimes people take longer to respond to work emails.

A: Being an expat is not for everyone. Don’t at all assume it’s immediately going to be what you think it is. If you have a legitimate good circle of friends, and have the energy to make the effort in a non-English speaking country, the smaller cities have fewer resources in English. Being isolated is one of the worst sensations in a foreign country. You might go out and do things alone but it can be very scary. Taking risks is the biggest thrill because aside from some wasted money or a slap on the face, you can’t go wrong with trying things. Don’t be afraid to look stupid or ask questions, you’ll get more out of life in general if you ask questions.