Interview with Daniel Kiteski – a Macedonian expat living in India

Daniel is a digital marketing specialist, globetrotter and digital nomad who has lived and travelled around the world. He shares with us the importance of keeping an open mind and learning about local culture. Read more about life in India in this blog on Passport Symphony.

For more on expat life, see our Expat Arrivals essential guides, Moving to India and Moving to Delhi. 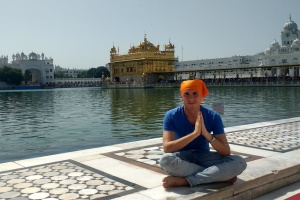 Q: Where are you originally from?
A: I’m from Skopje, the capital of Macedonia.

Q: Where are you currently living?
A: I’m currently travelling and, at the moment, I’m in the small town of Namsai in Northeast India, but I stay in Delhi.

Q: Is this your first expat experience?
A: No, I previously spent a year in the United States, a year in Russia, and I also spent some time in Slovenia and Germany as an exchange student.

Q: Did you move here alone or with a spouse/family?
A: I moved alone.

Q: Why did you move; what do you do?
A: I took a job for a Delhi-based marketing company. Having spent some time in the US and Europe, I was looking for a different experience and a country with a culture different from anything I’d ever seen before that would expand my horizons and help me become a more tolerant person. I think I made a good choice.

Q: What do you enjoy most about Delhi? How would you rate the quality of life compared to Macedonia?
A: Delhi is a huge city with something in store for everyone. One discovers new things every day, and Delhi may be many things but one thing’s for sure: it’s never boring. As for life quality, just like most Indian metropolises, Delhi is a city of contrasts. Working at a big IT company, I’ve met primarily well-situated people who can afford to buy anything they need and live a life that isn’t anything worse than the one in Europe. But unlike most people who come to work or travel in India, I’ve also met a lot of locals who live below the poverty line and live day to day.

Q: Any negative experiences? What do you miss most about home?
A: Of course there were, and any expat that says they didn’t have any negative experiences when moving to a new home is likely not telling the whole truth. As a white foreigner, I was often seen as a walking 100-dollar bill by a lot of locals, from taxi drivers to shopkeepers, and many of them often tried to charge me more than the real price.

I can also mention the lack of personal space I was so used to back home. I can mention the pollution and dirty streets. But one gets used to things like this and, by doing so, gets used to the local way of doing things and learns a lot about the local culture. And by keeping an open mind (and heart) I did get used to everything and fell in love with India. Honestly, I didn’t miss anything back home except for my family and closest friends.

Q: What are the biggest adjustments you had to make when settling into expat life in India? Did you experience any particular elements of culture shock?
A: I think I partially covered that in the last question, but just to confirm, yes, I did from the moment I got out of Indira Gandhi International Airport. It was 3am and my first thought was, “How can it be so hot and humid this late at night?” The local taxi drivers were all over me with “generous offers” for giving me a lift to the place I needed to get to. It took a lot of effort in explaining that there would be a driver coming for me but to my surprise, this happened three hours later than planned. This was my first encounter with the concept of ‘Indian time’, meaning (almost) no one ever shows up on time.

Q: What’s the cost of living compared to Macedonia? Is there anything particularly expensive or particularly cheap in India?
A: The cost of living is relatively cheap, and India is one of the cheapest countries I’ve been to. There are some items, however, that are quite expensive compared to the local standards, such as chocolate, meat (and meat-based products), cigarettes, alcohol, etc. The price for vegetables and different kinds of street food or snacks, on the other hand, is extremely cheap and something everyone can afford.

Q: How would you rate the public transport in Delhi? What is your most memorable experience of using Delhi’s transport system?
A: The public transport in Delhi is quite good. Eight metro lines connect the most important hubs of the city, and a lot of local buses and tuk-tuks connect the parts that aren’t covered by the metro lines. There are also a lot of ride-sharing apps, such as Ola, Uber, etc., but because of Delhi’s horrible traffic, I always prefer the metro.

Q: How would you rate the healthcare in Delhi? Have you had any particularly good/bad experiences with regards to doctors and hospitals? Are there any hospitals you would recommend?
A: Coming from a country with an okay-ish public health system and ridiculously expensive private clinics, I was pleasantly surprised by India’s private clinics (at least in the big cities). India is one of the rare examples where health privatisation brought more competition and lower prices. The prices for medicines were also surprisingly affordable.

Q: What are the biggest safety issues facing expats living in Delhi or India? Are there any areas expats should avoid?
A: I always say that if bad things are meant to happen, they will happen, and I couldn’t point out any particular safety issues or areas expats in India should be concerned about.

Q: How do you rate the standard of housing in Delhi? What different options are available for expats?
A: Relatively good. There are a lot of great accommodation options and a wide range of alternatives to choose from.

Q: Any areas or suburbs you’d recommend for expats to live in?
A: The most happening part of Delhi is South Delhi. It’s home to the best bars, nightclubs, shopping malls and some of the city’s most important historical monuments. The central part of Delhi is also really nice, less crowded and probably the cleanest part of Delhi, but housing in these two areas is more expensive too.

Q: Was meeting people and making friends easy? How did you go about meeting new people?
A: Yes, it was very easy. Locals are generally very friendly towards foreigners and I even had people approaching me on the street. Sure, some of them were after my money (or the money they thought I had), but I also met a lot of people who were being friendly just for the sake of it.

Q: Have you made friends with locals or do you mix mainly with other expats? What advice would you give to new expats looking to make friends with the locals?
A: In addition to meeting a lot of locals, I also met a lot of expats. Delhi has a strong expat community and a lot of groups and channels you can join to stay updated with all expat parties and events that are happening in Delhi. However, I didn’t want to spend all my time with expats, and I never do this when travelling abroad because if you spend all of your time with other expats, you risk only seeing their version of the country you’re travelling to and not the actual image of the country. I still believe the best way to experience a new country is through communication with locals.

Q: Was getting a work permit or visa for India a relatively easy process? Did you tackle the visa process yourself, or did you enlist the services of an immigration consultant?
A: I got a business visa and yes, it was very easy. I had a brief visit to the embassy, a 15-minute interview with the ambassador and the visa was issued on the same day.

Q: What is the economic climate in Delhi like? Do you have any tips for expats looking to find a job? Which resources did you find most useful?
A: The economic climate was (and is) similar to what I expected from the capital of an emerging economy with an up-and-coming young population. Competition is fierce, but foreign experts in their fields are highly valued and oftentimes earn more than an Indian-born person doing the same job in a similar company. The two websites that were of most help to me were Jora and Placement India.

Q: How does the work culture differ from Macedonia? Do you have any tips for expats doing business in Delhi or India? Did you have any particularly difficult experiences adapting to local business culture?
A: It’s very different. As I mentioned above, because of the rising young population, the competition is fierce, and people are willing to go the extra mile in order to get or keep their job. That’s why a plus or minus 50-hour workweek is not uncommon, and a lot of companies work on Saturdays too.

Q: What are your favourite family attractions and activities in the city?
A: Even though I came to Delhi alone, I learned a lot about the city and could suggest some interesting things to do. A picnic at the Garden of Five Senses is always a good idea. The National Handicrafts and Handlooms Museum is a great idea for kids (and adults alike) to get a glimpse of Indian culture through some interesting local artefacts. Your little ones will also love the Nehru Planetarium, Children’s Park, the National Children’s Museum and Aquarium, and Adventure Island. Don’t forget to check out Dilli Haat for some traditional clothes, Indian jewellery, local accessories and souvenirs.

Q: What are the schools like, any particular suggestions?
A: Even though I didn’t move to Delhi with kids, I can give my thoughts on this one because I spent some time at Shaheed Rajpal DAV Public School working with the school’s basketball team (as a coach). The Indian education system is stricter and more rigid to what we’re used to in the West. There’s very little room for improvisation when it comes to teaching, and the competition between the students is encouraged by the teachers from the earliest stages of education.

Q: Is there any advice you would like to offer new expat arrivals to Delhi or India?
A: The most important piece of advice I can give to expats planning to move to India is to keep an open mind and an open heart. India can be a test of patience, and (especially) in the beginning, you’ll notice the worst things surrounding you. The pollution; the dirty, muddy streets; the lack of personal space; the scam artists; people who try to trick you into paying more than you should… The list can be endless. But this is not the real image of India. India can be not only a great adventure, but also a teacher, that will teach you some very important life lessons. But if, and only if, you keep an open mind and do not judge right away. This is why most people either love or hate India; there’s no middle ground and the thing that makes the difference is you and your perspective and toleration towards your new home.

►For more interviews, check out Expat Experiences in India